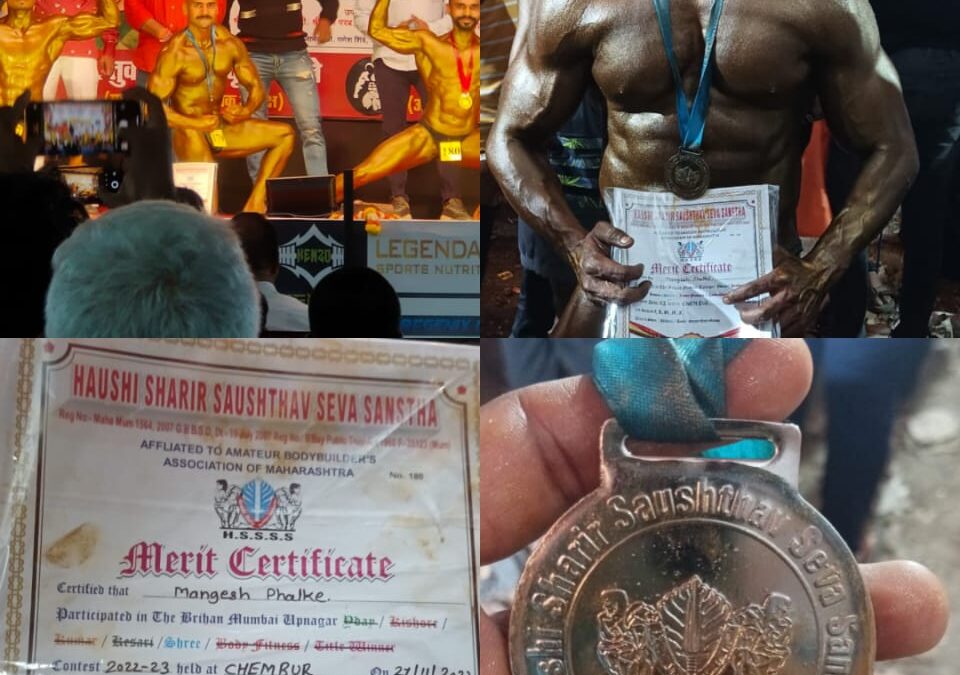 Mangesh Phalke, the security personnel in the Department of Security and Fire Safety at the Bharat Diamond Bourse has been in service for the last one year. In the recently organized Mumbai Suburban Shree Body Building Championship,Mangesh clinched Silver Medal and made his family and Bharat Diamond Bourse proud. Hailing from a humble family background with his father being a daily wager [Mathadi worker] and mother a garbage collector, Mangesh with his grit, determination and perseverance has stood above all while overcoming life’s challenges. He lost his father when in class 10 and thereon his responsibilities towards the family increased.

According to Mangesh, “The challenges have always been there with me and I learnt to live with it and overcome the same. When I enrolled for participation in the championship in the year 2015, I lost my sister and this wrecked me as I was close to her”. In spite of all odds Mangesh did not quit and enrolled in the Mumbai Suburban Shree Body Building Championship again in the year 2018 and secured top 10 position. Mangesh’s mother has played the most important role in his life by keeping up his morale and not allowing him to quit. She had to sell her jewellery just to see that Mangesh follows a prescribed diet that is rich in Proteins, Vitamins and muscle building fibrous food

Mangesh profusely thanked the Bharat Diamond Bourse committee for having allowed him to work out during office hours and providing other required assistance that supported him to go for the trophy. His dream ultimately came true on November 27th 2022 when the first Runner up belt was awarded to him with tears rolling down his eyes endorsing his hard work and dedication to make this happen. Mr Mehul Shah, Vice President, Bharat Diamond Bourse congratulated him personally for the achievement and said “Mangesh Phalke is part of BDB family and we want to see him top the State Level Bodybuilding Championships soon”. Mr Shah also assured him all support and assistance required to further his career and growth.

“The 2nd Edition of the “Lab Grown Diamond & Jewellery Exhibition “LDJS 2022” held from 5th to 8th August concluded on a huge success note..

“The future of diamond grading at GIA is exciting:” Sriram Natarajan