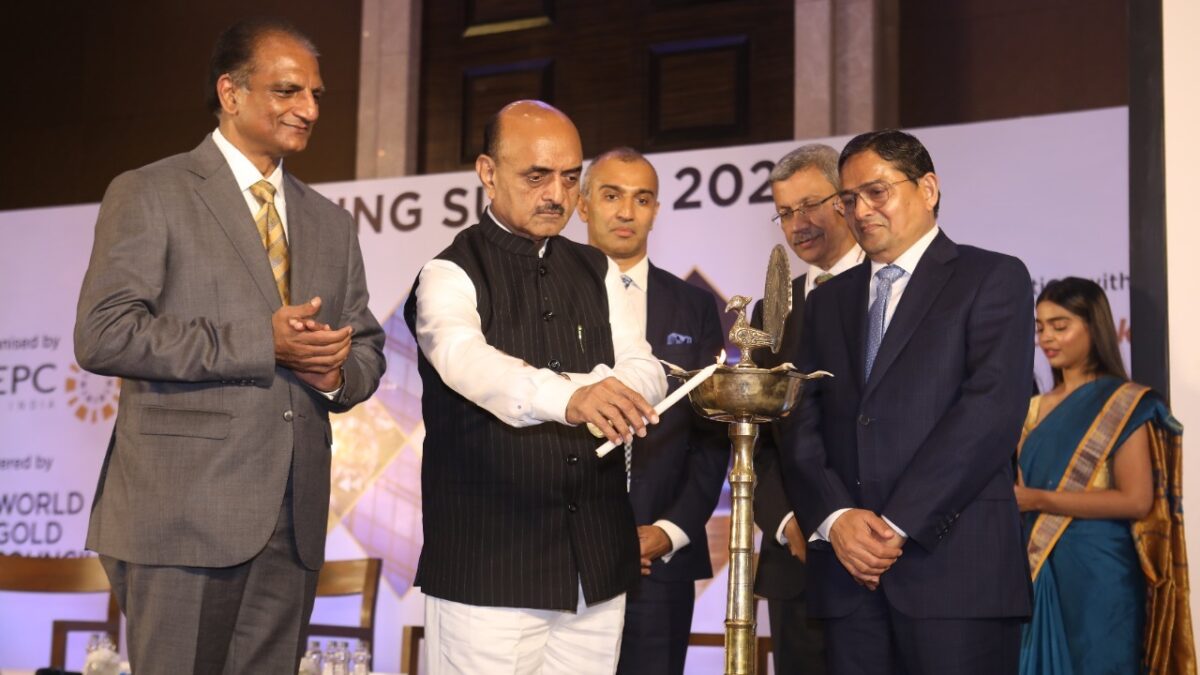 As an initiative to promote better banking & business practices, GJEPC hosts the annual banking summit which acts as a platform to discuss & deliberate the sector’s development. The summit was attended by several eminent chief guests, speakers & panellists that include Government officials, senior bankers, prominent businessmen, MSMEs & other stakeholders of the sector.

Inaugurating the Summit, Dr Bhagwat Kishanrao Karad, Hon’ble Minister of State for Finance said, “The gem & jewellery is an important contributor to our economy, bringing valuable foreign exchange and employing around 45 lakh people. Until today, India has been a price-taking economy, trying to be at par with the bigger players around the globe. But now, with the establishment of an international bullion exchange, it will bring positive impact towards making India a price maker in the world.”

Dr Karad added, “The government is always open to discussions and suggestions from the gem & jewellery sector to help it reach newer heights.”

Vipul Shah, Chairman, GJEPC said, “India has emerged as “a bright light” at a time when the world is facing imminent prospects of a recession. Over the past few years, the trade members have worked on making the sector more organised, disciplined, and self-regulating and transparent. And this has been reflected in improved credit flow to the sector from banks and financial institutions. In March 2022, credit to Gem & Jewellery Sector rose to a six-year peak of Rs. 80,400 crores. In a span of 2 years, from March 2020 to March 2022, credit to the Gem & Jewellery sector grew by 35%, whereas credit to all sectors grew by 6.7%.” “

Kirit Bhansali, Vice Chairman, GJEPC said, “The year 2021-22 was a dream run for the Indian diamond and diamond jewellery industry. We saw growing demand from key markets like the USA and Middle East; and India could capitalise on this advantage primarily because of the constant support from the Government in the form of relief measures and trade friendly policies.”

Saunak Parikh, Convener, Banking, Insurance and Taxation Committee, GJEPC said, “Besides growing demand & support from the Govt & banks, industry has also become a lot more transparent & compliant which has led this industry on a growth trajectory. As export business is expected to grow by 40% in the next 3 years, this will comfortably induce a credit growth of roughly 30% from USD 10.6 billion to USD 13.75 billion. There is an opportunity for credit growth in working capital as well as term loan for development of infrastructure including machinery as well as renewable energy.”

Ajesh Mehta, Co-convener, Banking, Insurance and Taxation Committee, GJEPC said, “I would request bankers to provide reasonable and adequate credit to MSMEs who are the backbone of the industry, and we seek encouragement from the Government to promote jewellery manufacturing and lab-diamond production in our country with a vision of an Atmanirbhar Bharat.”

The first panel discussion “Set to Shine” revolved around the tremendous performance of the resilient gem and jewellery industry, which going forward is set to touch $46 billion in exports by 2023.

While the domestic demand, especially the bridal market, will stay robust, the panellists observed that export demand in major markets would remain stable. The bankers also observed that credit by the industry had reduced in the last two years as the sector was performing exceptionally well with sufficient cash in hand.

The discussion ended with several demands put forth by the trade members and bankers for boosting growth. These include a E-commerce policy; Easy KYC norms by banks for ease of doing business; EMIs for consumers to enable them to buy gold jewellery; implementation of DESH Act; and policy on Duty Drawback mechanisms to be enforced.

Almost 80% of the industries in the gem and jewellery sector are MSMES. The panellists noted there’s a major shift in the industry and hailed that it has become more transparent. However, critical aspects that could increase the credit rating of MSMES are: transparency is the key which, in turn, means being more complaint; avoid giving out rosy projections about one’s company; and third-party ratings are huge validations for banks to lend to MSMES.

The third panel discussion was on “A Rising Star – Laboratory Grown Diamonds”. The panelist noted that LGD is a sunrise sector and even mature markets like the US have most retailers selling LGDs. LGD jewellery has an estimated 3-8% share of the jewellery market. Banking support for the LGD sector too is growing.

A special session on Fintech was led by Achal Mittal, Co-founder, Liquiloans. He informed that their company is a crowd funding platform registered with RBI NDFC P2P. The company provides working capital for wholesale jewellers and also finances consumers in a fast and secure manner.

Another special session, IIBX & Expanding The Bullion Ecosystem For Gem & Jewellery Sector featured Ashok Kumar Gautam, MD & CEO, IIBX. He spoke about the vision of Prime Minister Narendra Modi during the launch of IIBX, and the benefit of IIBX which include: Lowering of the bullion import cost leading to foreign exchange savings and there by making export of jewellery competitive, earning higher foreign exchange; Disintermediation leading to better pricing for jewellers; Proposed Gold Metal Loan (GML) product for Qualified Jewellers will likely result into lowering of cost in range of 100-250 basis points making the Gem & Jewellery Industry more competitive in export market.”

The last session was on Alternative funding by Varunkumar Varma, VP – Investments, Lightbox. He noted that their company invests in a concentrated set of assets that leverage brands and technology to sustainably shape the future of consumption in India. The company has funded Dunzo, True caller, Furlenco and jewellery brand Melorra among others. “We invest in disruptive businesses that are transparent,” he said. Citing the case study of Melorra, he revealed that the online B2C jewellery platform registers an average growth of 8 to 9 percent month on month, and receives nearly 30000 monthly orders pan India.

The constructive evening culminated with a vote of thanks by Ajesh Mehta, Co-Convener, BITC, GJEPC.