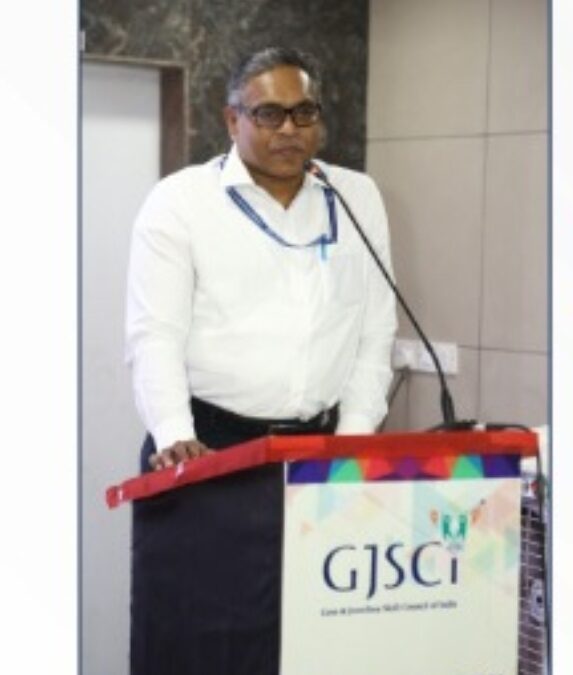 Speaking at the occasion, Development Commissioner Shri. Jagannathan appreciated the joint eﬀort put forth by GJSCI & Industry partners to make the JOSH functional in record time frame. He further highlighted that the present skilling center would ultimately become part of MEGA Common Facility Center (CFC) to come up in Seepz SEZ, Mumbai by MAY2023 which would create the industry ready Skilled workforce on a larger scale. Shri Sanjay Kothari (Chairman, GJSCI) has mentioned about major Initiatives like India jewellery excellence Symposium (IJES), Jewellery artiﬁcial intelligence & data science center of excellence in collaboration with IIT, Bombay, including the GJSCI’s intentions to come up with similar CSR funded Skill training centers in other major jewellery clusters in the country. He also appealed all the industry partners to participate & generously support these initiatives in big numbers. The event was concluded by vote of thanks extended by Shri Rajeev Garg ( CEO/ED, GJSCI) to all contributors, Industry partners , vendors & delegates from Seepz, SEZ DC oﬃce.

The Skill center has been set up approximately on 3000 Sq.ft area & equipped with all state of art training infrastructure. The center aims to train 75 fresh candidates in ever demanding jewellery manufacturing job roles like ﬁling & assembly, Micro-setti ng & Polishing. The center is targeting the mobilization of these candidates who are coming from deprived section of the society. JOSH would train 75 candidates every quarter which translates 300 candidates on yearly basis under this pilot model. The training would be provided absolutely free of cost & in order to make more aspirational & attractive the candidate will be paid an allowance of Rs. 5000 / month to take care of day to day basic expenses. Candidates would be rewarded with GJSCI “Skill Certiﬁcate” after the successful completion of the Training program. As this is employment led training program, GJSCI would facilitate the placement of all successful candidates in diﬀerent jewellery manufacturing companies.

A proud moment for India-Gujarat,Two milestones of Surat based STPL Company.

Natural Diamonds: An “Intruder” in the Laboratory-Grown Supply Chain