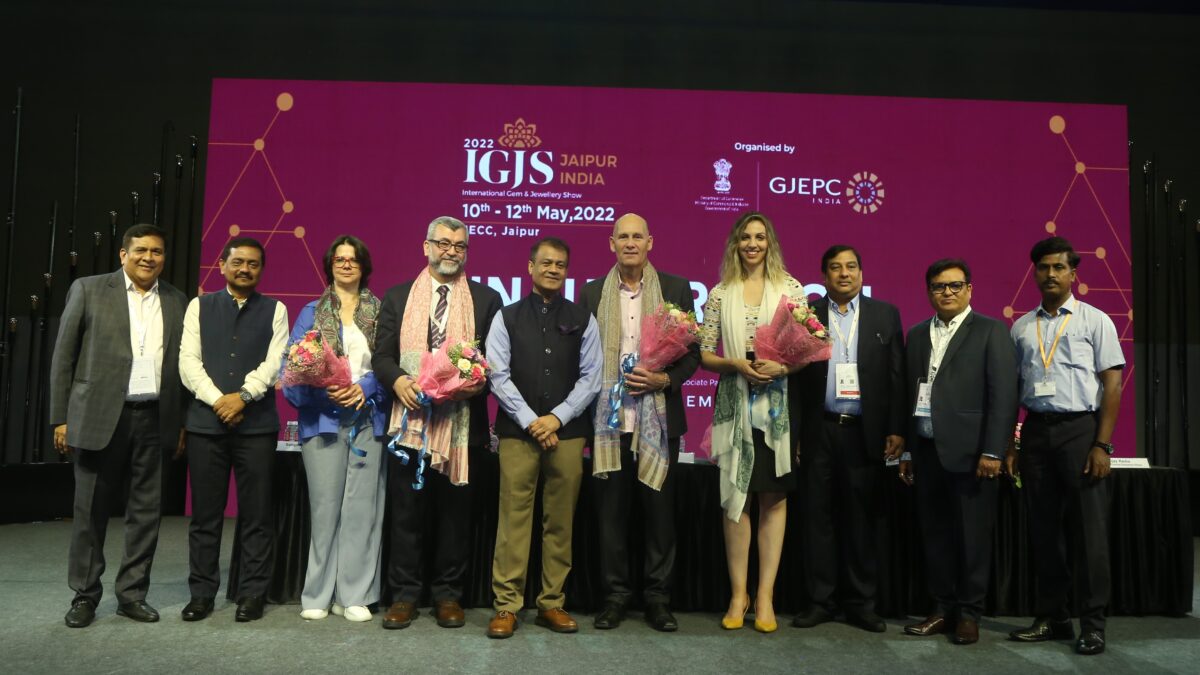 The three-day show witnessed 200+ leading exhibitors showcasing their gems and designer jewellery to 650 international buyers from across 48 countries.

Being the world leader in cut and polished diamonds, the coloured gemstones capital of the world, and the fastest growing gold jewellery exporter, IGJS catered to every sourcing need of the global market.

India plays a prominent role in the global gem and jewellery industry with exports of nearly USD 40 billion annually. Top markets are the USA accounting for 37% of India’s G&J exports, Hong Kong (24%), UAE (14.5%), Belgium (5%) and Israel (4%).

Speaking of IGJS 2022, Colin Shah, Chairman, GJEPC, said, “IGJS Jaipur owes its success to its aim of bringing together India’s leading exhibitors and international buyers. The show has helped us fulfil the Government’s mission to ‘Make in India for the world’. IGJS will also boost our efforts to reach USD 75 billion in exports in the next few years. We thank PM Narendra Modi for his bold vision to grow exports through the signing of FTAs with important markets such as UAE and Australia. I think we will see a USD 5 billion boost in exports this year itself as a result of these treaties.”

Dilip Shah, Convener, International National Exhibitions, GJEPC, said, “I am glad that we managed to successfully put up a show of such high magnitude involving all the important stakeholders. There has been tremendous demand from international markets for gems and jewellery post the pandemic, which is even reflected in India’s last year’s exports which stood at nearly USD 40 billion. We have received favourable feedback from international buyers and exhibitors about IGJS Jaipur and we look forward to organising IGJS in New York and Dubai later this year.”

Buyer Lissi Fracchia, CEO of her self-owned company from Spain, said, “India is recognised all over the world because of its beautiful jewellery and gemstones. I think that you have everything here at IGJS Jaipur to export to the world. I first visited IGJS in Dubai last year and it’s one of the best fairs I have ever seen. I’m a designer and gemmologist and I am already collaborating with Indian companies that I met in Dubai for manufacturing my designs in silver and 18-karat gem-studded jewellery.”

Visitor Mohammed Tamjid Abdullah, CEO of Jawahara Jewellery, UAE, said, “We are one of the fastest growing companies with around 250 branches around the GCC countries in the Middle East. India will always be one the main streams for the jewellery business in our country and region. Since I was a child, we used to import 21-karat and 22-karat jewellery from India and then diamond jewellery. And now with the all the exhibitions that the Indian Government and entities like GJEPC are organising either in Mumbai or now in Jaipur, I think we are on the right path. The show management encouraged me to come to IGJS Jaipur and I’m really impressed by the number of exhibitors and clients coming from overseas. Inshallah, by next year we should see this exhibition double in size.”

Exhibitor Abhishek Sand, Partner, Savio Jewellery, Jaipur, “We have had a great show at IGJS Jaipur as we have got customers from countries that we would never have been able to reach out to. We got serious queries from Iran, South Africa, Brazil, and Australia; and some buyers that we had first met at IGJS held in Dubai reconnected with us in Jaipur.”

Exhibitor Apurva Gupta, second-generation entrepreneur of Gem Worth, Jaipur, noted that as first-time participants in the IGJS format, they were happy to receive a few good queries from Russia, Saudi Arabia, and South Africa. “We are hopeful of converting these into orders. We are into wholesaling business of fine jewellery and gemstones and supply the world over. We also participate in the GJEPC-organised India Pavilions in JCK and Hong Kong shows.”

IIJS Signature Team Travels Across The World, Inviting Buyers For The Upcoming Show