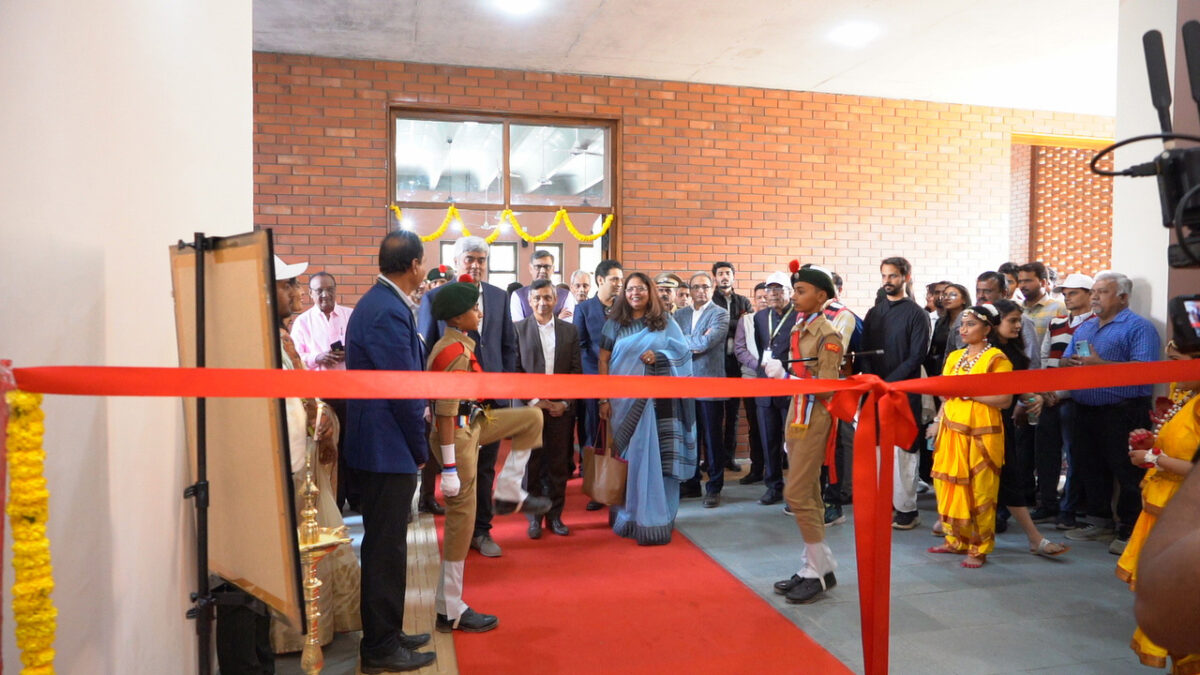 Gautam Adani being welcomes to Sahayog, the new building at Mamta Mandir, an institution for the Differently abled

The 75th Anniversary celebrations of the Vidyamandir Trust Palanpur, held at Palanpur on January 7th and 8th 2023, were addressed by a number of luminaries from different fields, including Shri Gautam Adani, Chairman and Founder of the Adani Group, and now, Asia’s richest person and attended by a huge number of alumni as well as donors and well-wishers from across the world.

The celebrations also included the inauguration of a number of new institutions and buildings on the existing VMT Campus; a memorial meet for Late Shri Arunkumarbhai R. Mehta and Late Shri Shirishbhai M. Modi, both of whom were stalwarts of Palanpuri institutions for many decades; and an Alumni gathering which saw participation of thousands of past students as well.

Shri Russell A Mehta (of Rosy Blue) is presently Chairman of the Trust, and Shri Ashish K Mehta (of Kantilal Chhotalal) is the Managing Trustee. Several other Diamantaires are closely involved with the Trust, and have supported its’ activities over the years.

The highlight of the celebrations was Main Event on January 8, addressed by Gautam Adani, Chairman and Founder of the Adani Group, and now, Asia’s richest person, and two prominent alumni of Vidyamandir, Mihir S. Shukla, CEO and Co-Founder of Automation Anywhere,leader in Robotics Process Automation (RPA) and Pranav Mistry, renowned scientist and inventor, Founder and CEO of TWO -working on Artificial Reality.

Adani, who hails from Banaskantha and has relatives who studied at Vidyamandir, outlined the key milestones in his journey in the world of business.

“I learnt various social skills growing up in a joint family in arid Banaskantha where living conditions were tough,” Adani said. He also outlined the various other qualities that guided him to become a successful entrepreneur, and stressed that the journey would “never be a straight line”. Entrepreneurship should be built on a foundation based on values of “trust, courage and commitment” and “self-confidence”, among others.

He exhorted the young students and alumni present to realise that the “time is ripe” for India to emerge as a new global superpower and called upon them to fulfill their true potential by learning to “Plan, Explore, Dream and Discover”.

“But,” he added, “it is also necessary to understand the power of empathy and develop a sense of purpose,” pointing to his decision to start the Adani Foundation with a corpus of Rs 60,000 crore to invest in health, education, skill development and other social needs.”

Mihir Shukla and Pranav Mistry too had inspiring messages for the young students attending the event.

Shukla, who started by saying that the visit to VMT brought back many pleasant memories – “the campus was my childhood playground” – emphasised that it was the education here that “opened my mind”.He urged the students to “Dream Big” and work for change that impacted many lives. “Big ideas must be followed by hard work and meticulous attention to details.” Anything could be possible with such an approach, he concluded.
Mistry said that Vidyamandir had provided him the foundation of “curiosity, confidence and knowledge” which propelled him to where he is today. Pointing out that he was proud of his origins, he added, “My dream is that Palanpur will provide a number of persons who will be leading the next wave of technological developments – in AI, Robotics, the Metaverse and more”.

Another important segment of the celebrations was the bhoomi pujan of a new campus of the Vidyamandir Trust at Malana, Palanpur, where the Vidyamandir Centre for Skill Development will come up over the next few years. The first such institute will be the Smt. Chandraben &Piyushbhai Kothari (Jewelex) Institute of Nursing.

Elaborating on the perspective of this new venture, Ashish Mehta, Managing Trustee VMT said, “Going forward the Trust has drawn up a Strategic Plan which focuses on Ensuring ever improving Quality of education; Strengthening Teacher Training; and Skill Development.”

He explained that VMT has taken initiatives in the first two areas while VCSD, which has been set up as an autonomous body, will help to bridge the gap between formal education and the specific manpower needs of industry. He thanked the Kothari family for what he described as the “largest-ever single donation” made to VMT, which has made the dream of the Skill Centre a reality.

Shailesh J. Mehta, Founder, Ex-Chairmanand CEO of Providian Financial Corporation, a Fortune 300 company and benefactor of Shailesh J.Mehta School of Management at IIT Bombay gave the keynote address on the occasion. He said, “Formal education will help develop the ability to think and is a must, but it must be linked to training that also develops the skills that are in demand.”

Welcoming the new initiative, he added, “India needs people who are trained for the workplace, and this is the perfect time to set up a Skill Development institute.”

INAGURATION OF NEW BUILDINGS AND PROJECTS AT VMT

On the occasion of the 75th anniversary, the Trust also conducted the inauguration or unveiling of new buildings and projects on its existing campuses.

These events were addressed by Mihir Shukla, Pranav Mistry and Janak Dwarkadass, each of whom spoke briefly the importance on the new projects and what they would offer to society:

The first day’s events came to close with a Memorial Meeting for two stalwarts known for their stellar role in development of education, health and other social institutions in Palanpur – Late Shri Arunkumar Mehta and Late Shirish Modi.

A number of speakers who had been closely associated with the two eminent personalities paid glowing, and at times emotional tributes to them.
ALUMNI MEET

The concluding events of the celebrations was the massive Alumni meet attended by thousands of students from many different batches and current and retired staff members too.