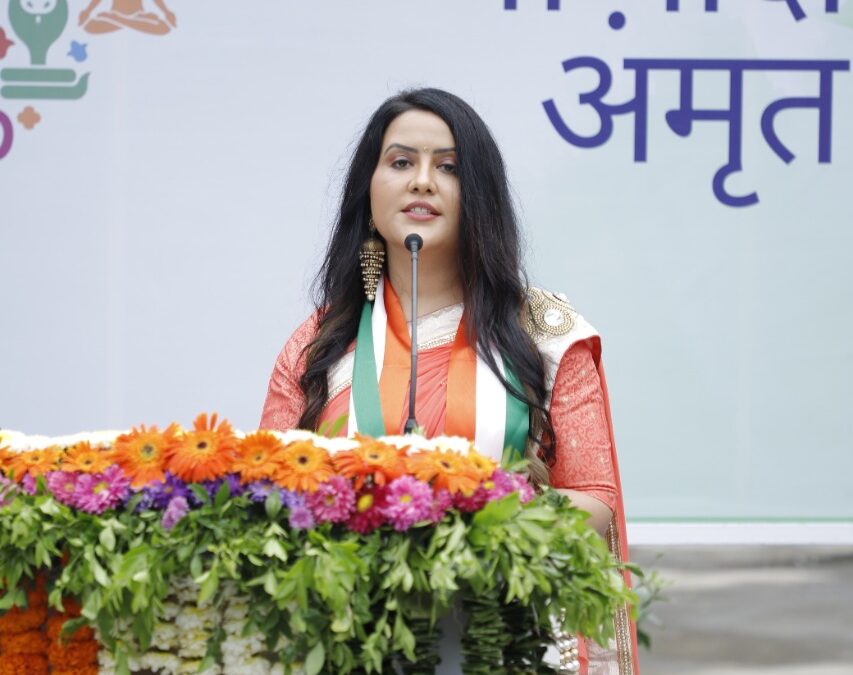 August 15th 2022 was indeed a remarkable day for the entire country as every Indian staying in India or abroad celebrated its 75th year of Independence with much fanfare and fervour not only within the country, but also world over. Bharat Diamond Bourse [BDB] the largest Diamond exchange in the world too celebrated the 75th Year of Independence with pomp and show inviting not one but three consulate generals [excellencies] along with Mrs Amruta Fadnavis. The entire Diamond complex was illumiated with the tricolor lighting effects that exuberated the beauty of the Saffron, White and Green colors including the Blue Ashok Chakra.

In his opening speech Mr Anoop Mehta, President Bharat Diamond Bourse emphasised on the important role that Bharat Diamond Bourse has played in the last more than a decade to generate much required export revenue for the country and added that today the bourse members are one of the largest foreign revenue earners for the country. In his remarks he opined that India is curently No 1 in Diamond trade and very soon is poised to become a supreme power in Jewellery business as well.H.E. Mr Frank Geerkens, Cosulte General of Belgium,in his speech spoke about the strong bond that Belgium shared with India and opined that without a partner like India, the city of Antwerp which is a major diamond trading place would not be in existence.

H.E. Mr Agus P Saptono, Consulate General of Indonesia reminded the audience about the over centuries old trade relationship that Indonasia shared with India especially in precious stones and other commodities and added that the two countries have been traditional trade partners and the bond has only strenghtened in modern times.

H.E. Mr Zainal Azian Nadzir, Consulate General of Malaysia spoke about the valuable relationship that the two countries share that dates back over 6 decades and is only growing stronger.Mrs Amruta Fadnavis congratulated the BDB members for having played a key role in bringing in valuable export revenue for the country and said that with such determination there is no doubt that with such contributions from important sectors, India reaching a 5 trillion dollar economy is destined to become a reality.In his closing remarks, Mr Mehul Shah, Vice President Bharat Diamond Bourse thanked all the guests for thier valuable presence. He added that Bharat Diamond Bourse today is not only the largest but also the safest place to do high value business. Recovery rate of lost diamond parcels or valubles in BDB remains at 100%, this might be the only place in the world where lost & found recovery in cent percentage.

He thanked all the critical teams in BDB that work round the clock to keep the world largest bourse safe and secured like the Admin team, Security, IT, Fire and safety, House Keeping, Gardening, Customs and all xecutive and staff members of the bourse. The 75 years Independence day celebration was a mix of emotional speeches coupled with security demonstrations, safety drills, cultural program and patriotic songs. The National Flag was proudly unfurled that swayed bringing in a New Dawn and a New Hope to every one present in Bharat Diamond Bourse.

BVC Hosts a Gala Night for the Crème de la crème of the Gems & Jewellery Industry at Rambagh Palace, Jaipur